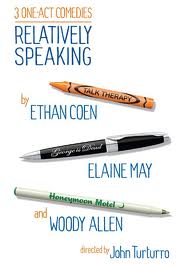 Some quick research tells me that these three one-act gems came together around the one that Woody Allen wrote.   The umbrella title, Relatively Speaking, refers to the concept of family - as in your relatives and close friends.  Each of the plays has a connection to that theme and while none of them was written with the other in mind, they certainly have been packaged up together in as a 3-item gift-set for all to enjoy. 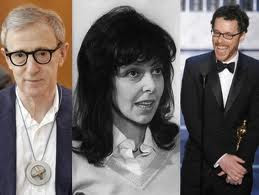 The first play, by Ethan Coen (of the famed film brother duo), Talking Cure, is the shortest and starts the evening off with some intelligent and witty banter between a prison inmate (Danny Hoch) and his psychiatrist (Jason Kravits) where we discover his issues probably stem from his mother and father.  Flash back - and we are brought to the dinner table where his pregnant mother (Katherine Borowitz) and father (Fred Melamed) are engaged in banter and bickering that is as acerbic and barb-filled as only a great writer could conjure up.

The second play, by Elaine May, entitled George is Dead, dives a bit deeper into the farcical with the always delightful and still attractive Marlo Thomas playing Doreen, an older, very wealthy, and very shallow woman in New York whose husband has just died on the ski-slopes in Colorado.  Doreen shows up at the apartment of the daughter (Lisa Emery) of her favorite nanny (Patricia O'Connell) who is, herself (the daughter), in the middle of a personal relationship crisis.  Ms. May has succeeded in this medium length gem to mix a ton of hilarity, along with a potent dose of sadness and pity. 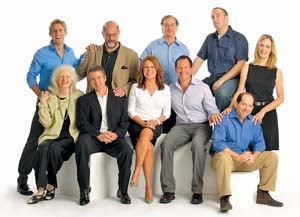 The final play, Mr. Allen's Hollywood Motel, is a classic grand-farce that takes place in a seedy 1960's era roadside motel that involves a runaway bride, the mid-life-crisis-filled father of the groom, his wife, the father and mother of the bride, a best friend, a rabbi, a psychiatrist, the groom himself, and a pizza delivery man.  Think hysterical Carol Burnett Show skit.  Think Woody Allen.  Think Jewish humor.  Think - I never laughed so hard in all my life.   This is due, in part, to the all-star cast and their impeccable comedic timing in this gem - Steve Guttenberg, Ari Graynor, Grant Shaud (from Murphy Brown), Caroline Aaron,  Julie Kavner (Marge Simpson's voice), Mark Linn Baker (Bosom Buddies), Richard Libertini, Jason Kravits (The Practice), Danny Hoch and Bill Army.

A nicely packaged, witty, and all around entertaining evening in the theatre.  Every play on Broadway does not have to be a powerful, moving, and ground-breaking drama.  Sometimes you just need to laugh and director, John Turturro, has given us quite a treat this fall season in Relatively Speaking.

Nothing like a great big group of talented, energetic and uber-adorable 20-somethings from Texas on a New York stage having the time of their collective lives to make you feel really old.  Kissless comes our way via Houston, Texas and is likely to garner top accolades at the NYMF this fall.

Part Glee, part West Side Story, part Ugly Betty, part Michael Jackson Thriller video - this teen-angst, coming of age musical enthusiastically took its first bow at the Theatre at St. Clement's on West 46th tonight.  Packed with an incredibly talented young talent, endowed with a peppy and decent, if not mostly predictable book given the subject matter, and jammed with a potpourri of pop/rock-opera-like power ballads and full-company numbers that are sure to bring a goose bump or two to your arm, this gem is sure to turn some heads and spark an after-NYMF life. 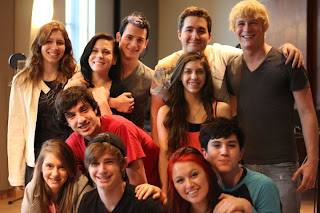 If anyone saw the show 13 make it's Broadway debut a few seasons ago  this tale, could possibly be considered the next installment in a hypothetical series - and while renaming this gem is unlike to actually happen, one might jokingly consider the possibility of calling it 18 just to line up the marketing concept and sell some seats.

The cast - far too large and talented (and did i mention young?) to highlight everyone here - brought an energy and enthusiasm that often times is lacking to the "home team" here in NYC.   Perhaps that feeling is just created by the festival atmosphere, perhaps a great, inspirational director, or perhaps, just maybe, it's just me turning into an old man - wishing i could do it all over again just like these kids.  I think it's the latter.
Reviewed by: doug marino

Ironic that just two days ago I saw a another off-Broadway play in which a wealthy wall-street type was driven to self-destruction.  The plot was certainly a different time and place but essentially a similar tale.  Man and Boy is one of playwright, Terence Rattigan's, early successes in the 1960's and rings as true, if not more-so, today. 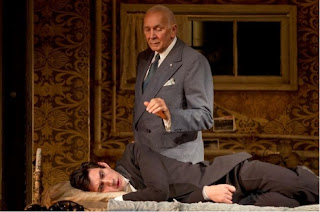 The plot follows an approximately continuous 2 hour timeline in the Autumn of 1934 in the basement apartment in Greenwich Village of Basil Anthony, whom we quickly come to learn is the estranged son of international financier and power broker Greor Antonescu .  We quickly come to learn why Basil has fled his family 5 years ago and through a series of cold and calculated maneuvers, why his brilliant and domineering father may just be the world's most callus and wanted financial crook the world has ever seen.

Mr. Langella commands the stage with every breath and step.  Mr. Driver embodies the ethos of a 1930's young American socialist while at the same time cannot make the emotional break from his dirty dealing father.  The entire cast brilliantly supports the two leads.  Of special note is the comedic relief provided by the accountant, David Beetson (Mr. Hutchinson) and the steadfast dedication Sven Johnson (Mr. Siberry), personal assistant to Mr. Antonescu.

Man and Boy may take place during the 1930's depression era but is as relevant today as it ever was.  With the recent echos of Enron and Bernard Madoff not far behind us - this play hits as close, if not closer to home, in these currently difficult global and economic times.
Reviewed by: doug marino 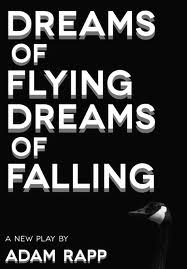 As I was leaving Adam Rapp's new play being presented by the Atlantic Theater Company at the Classic Stage Company's stage while they undergo a major renovation project on their own stage in Chelsea (the show must go on...), I was reminded of a simple little saying that a dear friend of mine and I have been repeating for for  many years now.  It goes something like this:   "You know, .   Simple.  Accurate.  Apropos. 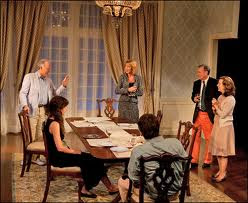 Mr. Rapp's obvious distaste for the ultra wealthy, wall street philanderers, and general ostentatious-ness of the wealth and power in the state of Connecticut (or otherwise) could not be more obvious.  Christine Lahti (Sandra Cabot), Reed Birney (Dr. Bertram Cabot), Cotter Smith (Dirk Von Stofenberg), and Betsy Aidem (Celeste Von Stofenberg) form a double power couple tag team of wealthy, disturbed, and simply put, rich assholes, who have ruined their children aptly played by Shane McRae (James Von Stofenberg) and Katherine Waterston (Cora Cabot) - and quite possibly also the lives of countless others in their quest to be "on top".   Mr. Rapp's clever dark comedy allows only a single beam of light and normalcy to shine throughout the play and her name is Wilma (Quincy Tyler Bernstine) and she is the black maid for the Cabot family.

This seemingly innocuous tale starts out to be a simple gathering of old friends for dinner in an opulent home in suburban Connecticut.  It ends up, assisted by Mr. Rapp's bizarre plot twists and scathing dialogue, with two murders (one animal, one human), with a passionate and explicit sexual encounter involving the two children (i saw that one coming a mile away) and the revelation of countess adult indiscretions and numerous crimes likely perpetrated by one or more of the dinner party attendees.  Wilma, the aforementioned black maid to the rich white folk, is positioned as both a physically and economically stereotypical maid but is brilliantly and subtly charged with being the only character who sees past it all and brings a transcendent sense of normalcy to the entire scene.  With this, Mr. Rapp, I was quite impressed.

Now, if only I could stop thinking about those poor geese!
Reviewed by: doug marino 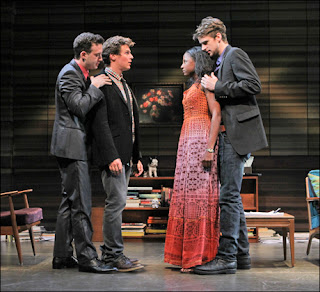 While Mr. Groff may be the headliner and main character (and still, by the way, absolutely adorable) in the Talbott's tumultuous plot, all 4 actors handily contribute to the heat and tension on the stage equally.   Crisp, staccato dialogue, rapid and ascorbic banter, and quick and uncomplicated scene changes contribute to the evening's experience.  Having seen this one at the very beginning of it's preview period, I can say with certainty that it is an extremely all written play and well acted production that can only get even better with age.  Mr. Bobbie in conjunction with Tesley + Company (Casting) are to be applauded for this fine ensemble.  The selection of each actor for his and her respective part is superb - each embodying what i presume is exactly what Mr Talbott envisioned.

No spoilers here.  Just know it will be a provocative evening of theatre that you will most likely carry out of the theatre with you into the streets afterwards.
Reviewed by: doug marino