Lynn Redgrave gave a tender, poignant, and memorable performance in her "one-night only" show - the story of her maternal grandmother - Beatrice.

A truly intimate peak into the life of one of our modern day theatrical treasures!

Bravo to the Culture Project for re-hosting!
Reviewed by: doug marino

If you go to one off-broadway show this fall - make it "Sides - (the fear is real)". Truly a romp - scene after scene (they're called sides) of "audition" antics... Six actors juggle roles as they show us what some of the most absurd, insane, and unbelievable auditions are like... all the while making an art of "bad" - actors, auditions, directors, casting agents, and everyone involved in the "business". And just to prove they're not - the very last scene lets u know! 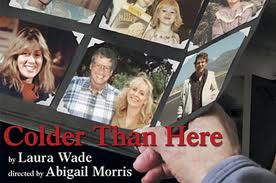 A woman with cancer who plans her own funeral. Sounds a bit odd, doesn't it? But in the context of a loving, yet quite dysfunctional and quirky family - perhaps not. 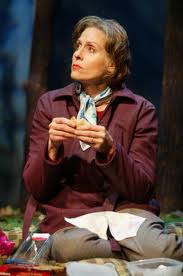 Judith Light gave a magnificent performance as Myra - the "rock" of a mother stricken with Bone cancer given just 6-9 months to live - But despite that bad new, she continues to interject humor, wit, and helps the family learn how to become the "glue" that she always was to them. The supporting cast - two polar opposite daughters (Sarah Paulson - Laura in "The Glass Menagerie" and Lily Rabe - Anelle from Steel Magnolias") and a curmudgeon of a husband - a veritable potpourri of talented and witty dysfunction themselves - did a remarkable job at "not dealing with" and "dealing with" the impending death. Poignant, Tender, yet plenty of laughter thru the tears moments - - Which, I think, is exactly the way mother would have wanted it.

"Colder than Here" - is only here for a short run at the Lucile Lortell Theater in Greenwich Village. Give it a try!!
Reviewed by: doug marino 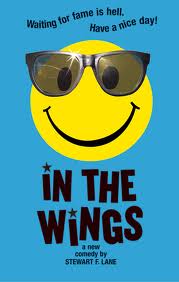 Stewart Lane - you won 3 Tony Awards for producing shows - "Thoroughly Modern Millie", "La Cage Aux Folles", "The Will Rogers Follies". Due us all a favor - stick to producing. Your writing is awful. The poor people on stage were punished by your high school-esque plot, bad dialogue and poor choice of subject matter. - - and let's not forget that the actors on stage didn't exactly dazzle either. I mean how could they - the subject of the show was actors who weren't that good trying to make it in a show..... a show entitled "I married a Communist".... I thought I'd seen the worst of it by act 2, but it became unbearable when Peter Scolari (the other "Bosom Buddy") did a "rap song" about Karl Marx.... All in all - a 100% flush down the toilet. "In the Wings" should stay in the wings. 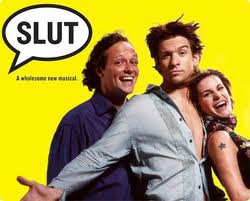 You're talented, young, charming, oh-so-good-looking (hmmmm, i wonder why you got the lead role in a new musical entitled "Slut"??). But the primary question I have for you is "Why did you leave the smash-hit, Alter Boyz", to take it"?!

If you still have a chance - RUN BACK! Heck -go on the national tour!! 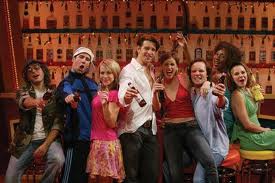 Now, i'm not saying it wasn't fun fanning myself with the "playbill" watching the sweat glisten all over that uber-sexy body (the tattoos make it even more so) for two hours (the theater's AC was on strike, just in time for first preview nite!).


Over at American Theater of Actors (read - low budget) I was slightly entertained, but left wondering why you took what is clearly a step down to some "B" material. Ok, you've got some talented cast-mates and it is the lead after all, but c'mon - the plot is a farce, the jokes, stale, and the humor, sort of "high school-ish". There were some bright spots, yes. I must admit i chuckled and hooted a few times. But just a few. But I digress... (Did I mention, you looked good with your shirt off??).

Yours truly,
Doug Marino ( a fan truly thankful i only paid TDF rates to see you sweat)
Reviewed by: doug marino

Yes, the subject matter of this email might dump it in your SPAM folder!! However, if by chance it makes it through - you'll be glad it did. Would you ever think of going to see the musical story of the life of Dr. Alfred Kinsey?? Well, with a bit of skepticism - I did.... Off-Broadway at the Peter Norton Space (42nd and 11th). This space (and many others off-broadway along 42nd Street are all brand spanking new!)

Not having seen the movie last year, I figured - what the heck - - and what a good decision that proved to be!! Talent extraordinaire!! Not often in an off broadway performance to you get a live "orchestra" (ok, maybe a 5 piece band, but still). Crisply choreographed, executed with aplomb, the story rolled along in a mere 2 hours and right from the beginning i was tapping my toes and bouncing my head. Now, this was truly a new, but old fashioned "broadway" musical... high kicks and dancing girls in every scene... (ok, Benjie Randall was still my favorite!). Much like a Cander & Ebb musical - it had more than it's share of rousing show tunes, tap dancing, a couple of angst ridden ballads all the while plenty swooshing and swooping all over the stage.

Speaking of the stage - it was a bit small (this is off-broadway, afterall) but every inch of it was used cleverly. It's in previews - so the lighting queues could have been more crisp, the curtain and scenery need to have a few tighter transitions, but that stuff is cosmetic - - the talent is there. Most of all - they look like they're having fun while doing it.

You know the general story - but "Dr. Sex" fills in the blanks in an entertaining and clever format. Before you know it "the book" is published and the curtain is falling. Remember - before Dr. Phil, before Dr. Ruth, before Dr. Scholls - - there was "Dr. Sex". Go see Alfred, Clara, Wally, and the rest of the Kinsey players before the Tony crowd gets wind of it. You won't be disappointed. Worth plenty more than the $30 ticket!
Reviewed by: doug marino 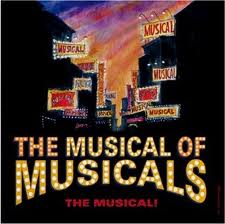 A complete and total satire of, you guessed it, the musical! The plot (five times) is very simple:

Each time the "story" is "told" in a different style/genre of musical theater (Rodgers & Hammerstein, Stephen Sondheim, Andrew Lloyd Weber, Jerry Herman, Kander & Ebb). Now i consider myself a complete theater whore - but even tonight, i found myself longing for the company of my good friend Dennis Larkin - the only person I know who might have laughed harder than me (and gotten more of the references!) and he would have explained all the ones i missed after the show!....

This show was filled with double (and triple and quadruple) entendre, plays on words, puns, twisted and clever lyrics set to ever so familiar music of the "masters" - and most of all - laughs!
Reviewed by: doug marino