A summer delight is being played out over at New World Stages.  Written by Luigi Creatore after he retired to Boca Raton, Florida after an award winning record producing career (Can't Help Falling in Love, The Lion Sleeps Tonight), one can only imagine how much material was discarded in his quest to entertain us!   Seasons of the Golden Girls could probably have been written with all he has witnessed! 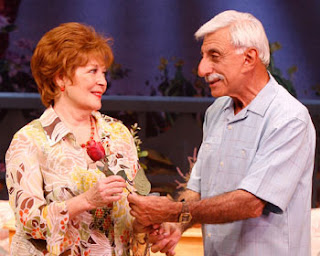 Jamie Farr (M*A*S*H) and Anita Gillette (Moonstruck, Jack Klugman's wife in Quincy take command of the stage in 3 separate stories that all play out at in an apartment complex in Boca Raton.  One part farce, one part pathos, and one part heartwarming - this trio of short one scene plays all paint an endearing and amusing look at life after 70 in the sunshine state.  Old people taking back to the soap opera on the TV set, pastel flowered couches, hearing problems, mall hopping and shopping, Alzheimer's, the children's inheritance, mishaps and mayhem all ensue.  Before, during and after the show and as the stage is reset between scenes, take notice of all the fun music used to recreate an era-gone-by ambience in the theater.  And let's not forget the theme song of Flamingo Court - Old is In!
For a "hoot" at the old "coots" - take your walker and amble on over to this gem on 50th Street!  You won't end up spending all your kids' inheritance either!
Reviewed by: doug marino

The Marriage of Bette and Boo

Roundabout Theatre Company was smart to place this stink bomb at the end of their season.   You see, they already have their subscriber base to fill most theater and there is always a good percentage of tourists who will be fooled into seeing an off-Broadway show for cheap in August.  What I do like about this show is the idea and concept.  The concept that we all really do have problems in life, our families are all f-'d up and marriage and religion are only superficially observed.  There's something in just about every character that most people (unfortunately) can relate to.  It's a farce, of course, so everything is exaggerated, but that's the point.  However, the execution simply falls flat on stage. 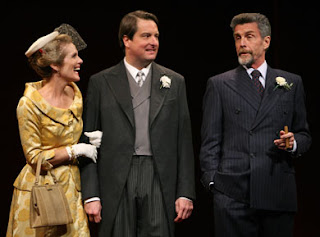 I did not get the privilege of seeing Victoria Clark (one of the few reasons i really did want to see it) but her understudy (Lizbeth McKay) was brilliant, nonetheless.  Julie Hagerty's (Morning's at Seven, The Odd Couple) character, Soot, was side-splittingly funny.  John Glover (The Paris Letter) played a marginal drunk.  I enjoyed Charles Socarides (Awake and Sing!) as Matt, the narrator and central character to the story. He swiftly kept the story moving and provided the needed background to the story unfolding before us.

Walter Bobbie has done a substantial job at keeping this stink bomb moving along swiftly and crafting the farce.   Unfortunately, this one belongs on Saturday Night Live or Comedy Central.
Reviewed by: doug marino