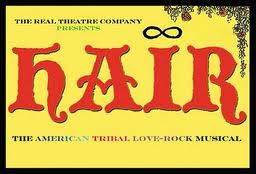 This production at the Acorn Theater on 42nd Street was a bit of a surprise. First, it's not an equity production. The Real Theater Company, lead by Maggie Levin, pulled off a move of it's midtown east production to a decent off-Broadway stage near the heart of the theater district.

There are some good and bad elements in this production. I have a feeling that even with the move to the Acorn, most of the staff is either unpaid or significantly under paid. The sound was awful. Microphones didn't work more often then they did work. The band was way to loud and overpowering- it should have been moved off-stage to compensate. The cast (and it is a large cast) didn't seem to be comfortable singing! Vocally, they were mostly unpolished and off-key. At times, it really did seem like a high school production. (a pretty good one for high school, but not so good for off-Broadway!). 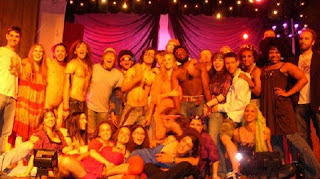 Now - let's get to the good part. The actors were all physically committed and engaged - and dedicated to their characters and the drama. It's a physically demanding show. I saw lots of acting talent on stage. Two rather mesmerizing boys still stick out in my head - Anthony Michael Sanford as Woof and Kai Chapman as Apache - (ah, the beauty of youth!). The leads, Ryan Stone as Berger and Logan Hall as Claude showed great promise and I look forward to seeing them both acting on Broadway stage in the future.

The show ran close to 3 hours - as they didn't cut a single number! The talented band blasted out the shows favorites - Aquarius, Let the Sun Shine In, and the title number, Hair. The costumes and props were adequate - again, with a limited budget - they seem to have pulled that part off quite well (and it wasn't so bad looking at Apache without a shirt anyway).

I read another review of this production which noted that Hair was never intended to be polished and packed with talent. True to its origins at the Public Theater in 1967, it is actually meant to be raw and counter-establishment. To the discerning Broadway viewer - that may end up being a contradiction - both visually and aurally. It's possible that this production actually hits this original mark. Food for thought.

Overall, it must be quite fun, but still challenging, to spend 3 hours pretending you are stoned out of your mind! No doubt about it - this cast had FUN on stage. And that's important too!
Reviewed by: doug marino

Howard Korder penned this play about 20 years ago - and it seems not a lot about the post-adolescent male heterosexual world has changed. I did not see the show in 1988 in it's Pulitzer Prize winning debut at Lincoln Center nor for it's revival in 1998. But I am guessing it was pretty much as accurate then as it was now. This production at the Spoon Theater on West 38th Street on the 5th floor is a far cry from Lincoln Center, that is for sure.

The play deals with 3 "boys" dealing with the issues that dog the male species at the tender age of "just after college". Party Boy. Sexual Conquests. Growing up. Marriage. Maturity. Growing Up. The changes in you vs the changes in your friends - growing apart. Jack, the central character, played by stand-out performer Ryan Nicholoff, portrays the dominant alpha male of the 3 boys - but ultimately reveals that it is he who has the biggest failings and insecurities.

The presentation this far "off Broadway" tends to showcase the play as much more of an experimental production - but at the same time - a bit more "real". The dumpy theater actually seemed as if it was appropriate to the low budget lifestyle of the boys. The ages and experience of the actors seemed to be both a plus and a minus to the production. Done in small vignettes - I most often got the sense that the scenes just ended. It was the most obvious element that made it seem like we were at a rehearsal, not a performance. The actors didn't know what to do to bring the scene to the dramatic ending that it should have.

Overall - it seems that Counting Squares Theatre made a solid attempt at mounting the work that remains as relevant as it was 20 years ago. It seems the straight boys have a few issues too!
Reviewed by: doug marino 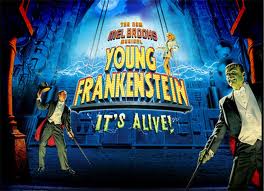 This is a review of the out-of-town “try-out” of an upcoming Broadway Show. Make no bones about it – this show is coming to Broadway. There’s not a chance in hell that Mel Brooks and his producer buddies will “pull the plug” on this $15 Million dollar investment!

But nobody ever said that putting

on any Broadway show was easy. But putting on a brand new $15 Million dollar show that all the critics expect to be “perfect” and all the audiences expect to be “the best they’ve ever seen” is a feat that can only be undertaken with advance planning, rehearsal, skill, and sheer chutzpah. And if anyone can tackle that task – it’s the 81 year old Brooks.

adding appropriate music. Putting on a flawless Broadway show that will “knock your socks off” is like proof-reading an important paper you wrote - over and over again. You check, recheck, edit and re-edit the story. A Broadway show is no different. With a mere 30 performances to understand audience reactions to the jokes, remove one here, add a zinger there, hold for the laughs here, or cut a number there – it really does require a bit of juggling. The actors are often given new lines. Songs changed. Lighting queues adjusted. Scenic movements adjusted. Lines changed again

… and again! Doing all this out of the glare of the Broadway spotlight is critical. Big budget shows of today also have lots of technology – computer controlled sets, lights, sound and more. They don’t perfect themselves overnight. The actors and the technology have to meld. The folks who run the technology have to plug it in, try it out, change the dials, and adjust the volume. All this is necessary so that everyone feels it’s ready for “prime time” on the great white way. After all – once you are there and charging $250 a ticket, it better be perfect!

“rehearsal”, but that’s what it really is) the show literally packs up everything into 18 wheelers and moves across the country to New York. Then they have to unpack everything and set it up all over again - - thus the need for “previews” in New York. Shows can be changed while on the “tryout” and still more in previews. Once previews are over, it’s pencils down. A joke that got a belly laugh in Seattle might get nothing more than a snicker from a more sophisticated New York audience. Sometimes it works the other way around - things people never laughed at out of town stop the show in New York (a joke by the Yiddish shoe shine man at the Transylvania Heights railroad station seemed to elicit nothing more than a few chuckles fro

m the Seattle audience – but I’m sure that once the New York audience hears it applause and laughter will fill the theater). Sometimes you just can’t be sure what changes when the show moves to Broadway. One thing, however, is for sure – this show is has all the ingredients to be a smash hit - from the writing to the direction and choreography (ala Susan Stroman) to the technical staging (scenery design, sound design, lighting design and special effects). Fifteen million dollars goes a long way to buy that – but it doesn’t go all the way. The talent on stage is what takes it across the finish line.

The Cast: The cast of Young Frankenstein is a remarkably talented group

The show: Run Time - 2 minutes shy of 3 hours mostly due to the fact that Mr. Brooks and Ms Stroman stick to the entire plot of the movie – cutting nothing just yet, but I would image a few things will be trimmed here and there and we’ll get it down to 2:45 or 2:40 by the time it gets to NYC.

The Story: Well – what would you expect? It’s just like the movie – silly, chock full of Shtick, and hysterically predictable. The jokes and one-liners roll on and on and would you really expect anything less from Brooks?

The Music: The Orchestration is appropriately grand with a full overture, Ent’re Act and Finale. It’s schmaltzy, upbeat and a true Broadway composition. Kudos to Doug Besterman. There are plenty of chorus number and knock ‘em dead, show tapping show tunes. Honestly, mostly all un-memorable once you leave the theater, but all fun and silly toe-tapping schmaltz non-the-less. Even the ballads are comical – most notably Frau Blucher’s rendition in the laboratory of “He was Vas my Boyfriend”. I think that Irving Berlin might possibly turn over in his grave (laughing, of course) when he hears what they did to “Puttin’ on the Ritz”.

If I had one production note to give Mr. Brooks and Ms. Stroman- -improve the sound. (the sound, not the sound effects, which were remarkable.) I know the Seattle Paramount Theater is huge – radio city huge – but you can’t let the poor chorus go un-comprehended. At times I felt like the show was on stage next door and we were piping in the sound onto our stage. I truly hope this is just a function of the venue and is not the intended result at the Hilton Theater.

I’m sure there will be fans of the movie who will say “it pales in comparison”. I’m sure there will be folks who “hate it” because it’s just a movie remade and the jokes are stale. Yet others will flock to it just because it has Megan Mullally in it! Some will just go because it’s a Mel Brooks blockbuster on Broadway. And after the hit, The Producers, it’s a safe bet they’ll flock. Whatever your reason for attending - I am going out on a limb to say that this one might just be silly enough, packed with enough talent and technically dazzling enough to be worth the utterly criminal price of $250 - $400 per ticket they have the gall to charge in New York for it (but that’s the subject of a whole other blog).

The People vs. Mona 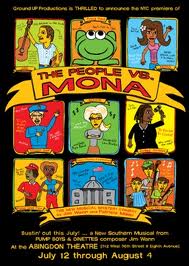 I won another set of tickets from BroadwayBullet - Thanks again Michael Gilboe!! Isn't this fun?!

Well, if you don't think so, you sure will think so about The People vs. Mona. It can only be described as adorable! It's clever, cute, funny, light, and just right for a summer's evening of entertainment over at the Abington Arts Complex on West 36th Street. I understand from eavesdropping on a few conversations at intermission (i guess this could be false!) that some or all of the company is based out of North Carolina which certainly goes a long way in helping generate the warm feeling you should have about Tippo, a little southern town in Georgia half way between Atlanta and Savannah.

The show is told like a story - the main narrator is the defense lawyer for Mona, accused of murdering her new husband. It's a a small town and, as you might expect, one with a few "characters" - and guess what - they were on stage too! Everyone sings and dances - including the 3 piece band with the cute keyboard player Dan!).

Without revealing the entire story - let's just say you'll be grinning from ear to ear when you leave. I know I was and when you see the cast doing the same thing - you know it was truly fun to be a part of. This isn't your father's court room drama folks. Trust me on this one!