In what I believe is the first off-Broadway revival since its original 2001 incarnation, Keen Company has brought back Jonathan Larson's pre-rent work, Tick, Tick...Boom! in a magnificent, relevant, and energetic production over at the Acorn Theater on Theatre Row. 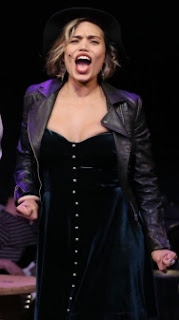 Only a 3-hander, this production has cast an amazing trio of actors with tremendous chemistry both vocally and as a true ensemble.  Nick Blaemire (Jonathan), George Salazar (Michael), and Ciara Renee (Susan) bring the auto-biographical work of the late Mr. Larson roaring to life.  Mr. Blaemire is nebbishy enthusiastic about his uber geeky and artistic and anxiety filled role as Jonathan.  Mr. Salazar is cast as the foil to Jonathan's artistic life - a former self-described "good but not good enough" actor and best friend.  Ms. Renee bring powerful vocals, beauty, and general-sexy to the role of Susan. All 3 run the stage for just under 2 hours with nothing but a few sips of water wandering through Mr. Larson's part Broadway, part ballad, part rock and roll lyrics and musical performances.  Of special note, Mr. Blaemire actually plays the piano very well - (i just hate it when the actors fake it).

This show was written pre-Rent but is generally auto-biographical in terms of where Mr. Larson was in his life.  I almost wished Jonathan would have tinkered on the keyboard with a tune from Rent just to really tie the two shows together.  Rent, as well, was somewhat auto-biographical in terms of Mr. Larson's life but it was conceived with other people and after this show was written. 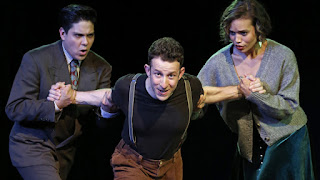 The show if not nearly as famous as the aforementioned Rent - nor is it as theatrical or heavy a story. There are not, as in Rent, people parading through New York City or crashing weddings.  This story is a bit smaller in scope and perhaps more personal in nature.  Mr. Larson died suddenly before Rent could be brought to the stage and it is such a shame as we will never know how much more we could have heard from this very talented man.  For now, we will just have to enjoy the beauty of his works such as this through the very talented cast that puts him back on the stage 8 shows a week.
Reviewed by: doug marino