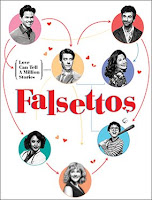 Ladies and Gentlemen, we have a revival of a much loved show now playing again on Broadway after a long rest.  Falsettos, a book by James Lapine with music and lyrics by William Finn returns to Broadway with great fanfare.  The show is actually two shorter plays, March of the Falsettos and Falsettoland combined into one musical.  It seems that in a rush to the stage with the subject matter, Mr. Lapine threw it all together without much thought as to what would look like.  It's cute, tender, and touching - yes.  However, the requisite "he's dying from AIDS" storyline seems a bit disjointed, sloppy, and thrown on the stage in a rush to get it before the public. 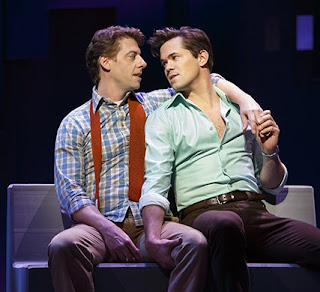 Marvin seems a bit mis-cast (Christian Borle).  He's a bit older, he was (tragically) married and has a kid - it was the generation for such nonsense i suppose.   Wizzer (Andrew Rannells) is younger, sexier, and quite clearly gets around as it were.  Even the name of the character seems a bit dated, to be honest.  The performance I attended was quite unique in the fact that both Stephanie J. Block (Trina) and her understudy Courtney Balan (Trina).  A second understudy Stephanie Umoh (Trina) with a mere 2 hours of rehearsal time went on - script in hand.  I was nervous for the first 15 minutes but soon realized she was not going to miss a note, a step, or a line.  In fact she was fantastic.

I sort of wish the entire show was as rewarding as watching an actor really executing her craft with aplomb.  I still do not really know exactly what the falsettos are or were or represent.  Bizarre to say the least.  I think the best character and actor on stage was perhaps Mendel (Brandon Uranowitz).  By far he seems to be comfortable in his own shoes in this show.

While I enjoyed the overall performance, it left me with a feeling of being incomplete, unexplained at times, and disjointed.  The actors seemed mostly mis-cast and the lack of set (mostly a geometric block of shapes that fit together to all sorts of un-identified formations) did not do the production and favors.  I don't see this one lasting very long.  But stranger things have happened.
Reviewed by: doug marino