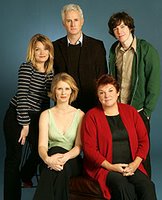 Well they just don't tell you on the posters just how biting this show is going to be! After about 20 minutes you come to realize that Cynthia Nixon and John Slattery have lost a child - and the drama doesn't stop there. The younger, quite irresponsible sister finds out she is pregnant - quite an inappropriate time for it, as you would imagine. Mom (Tyne Daly) doesn't help out with her meddle-some nature and insistance that the family seek help with their greif. Dad wants his son's dog back from the family they sent it to right after the accident, but wants to sell the family house and move to a new place. Throw in a visit from the young boy who actually killed the son (a car accident) - and you have one evening of high drama and tension in the family house!

In the end - it seems that the message is that everyone deals with greif in their own way and in their own time. Well - that may be true - but you'd better buy your ticket to see this show on ITS timeline - or you'll miss a true gem and an extremely talented cast!
Reviewed by: doug marino 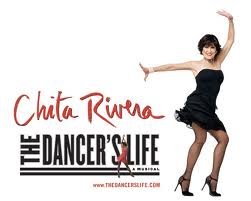 The Incomparable Chita Rivera. A legend on two legs. And boy, those legs still look good at 72! As a matter of fact, she looks like a million bucks from head to toe! And man, she's got class - paying homage almost immediately to a few of the "ladies" who very recently came before her on Broadway - Elaine Stritch, Bea Arthur, and Barbara Cook. She's kept the "talk about the other legends in my opening act" tradition going. 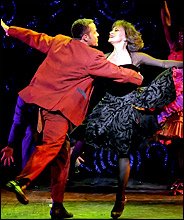 As far as the one-woman shows goes -this one is tops. It truly is the story of "a dancer's life" - the ups and downs; highs and lows; co-stars, choreographers and directors; loves, losses, and many other funny stories. You don't get that "I'm a star and I'm telling you my story" feeling from this classy broad. It's more like "Let's chat about this little thing called a career I've had and how much fun it has been". As Boris Kachka recently said in a review - "It's not the triumph-and-tragedy one woman gab fest we've come to expect..."

Chita still has "it". Well - ok - the voice is a little "rough around the edges", the kicks aren't quite so high - but let me tell you - at 18, I don't think I had as much energy as she has on stage. I mean - c'mon - some people her age can't walk to the bathroom without resting... but she struts her stuff all over the stage 8 times a week and looks like she enjoys each and every minute of it! 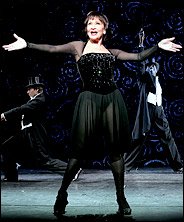 Far from a "black box" theater production too. The lighting, the orchestra - and let's not forget the silhouette scenes and the vibrant colors bring this story to life. Her backup dancers fill in the blanks and simply drip with energy and sexuality.

For people of all ages, it's a trip down "memory lane". Anyone alive and breathing will recall something they've seen her in or know her for. Aside from the obvious - West Side Story and Chicago - Chita has really had a rich life on (and off) stage. All this and we didn't hear a single "hazy" story about booze or dope... 'cause we all know Broadway doesn't go for that. Chita is 100% Broadway.

Living legends are not to be missed. This one is no exception!
Reviewed by: doug marino