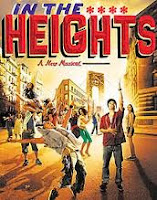 A fresh, new musical chock-full of rhythm, heart, and Latin soul. Lin-Manuel Miranda conceived this musical in 2005 while still in college and worked dogged days and nights to bring his dream to the Broadway stage. Young, fresh talent is exactly what Broadway needs more of. 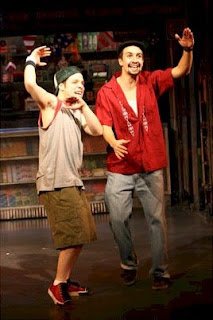 So what's different about this show? A whole lot and not so much at all is the answer. At it's core - it's a traditional musical in structure and content - Man has a dream, falls in love, struggles to overcome adversity, bittersweet triumph results and he gets the girl. There are two leading couples, one set of parents, one grandmother, a chorus of friends and neighbors, and a whole lot of dancing. So what's, different? It's 100% Latino. It takes place today on a corner in Washington Heights (hence the title). It's about modern immigrant struggles - non-stop and in-your-face. West Side Story may have been the first - but Lin-Manuel Miranda has brought a contemporary twist to the presentation that seems to draw in the adults as well as throngs of young kids. 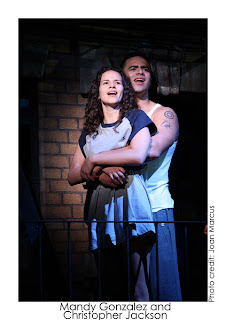 The recipe for success: A dash of rap and a heaping spoonful of Latin rhythm and dance give this show a constant true-to- life feeling of Washington Heights. Everyone can relate to the little bodega on the corner and the larger than life figures that inhabit the neighborhood near the A-train at 181st Street. Add a pinch of cross-cultural (read, intra-Latino prejudice) family drama and a splash of economic hardship to the picture and you have a potent cocktail the audience consumes with delight. 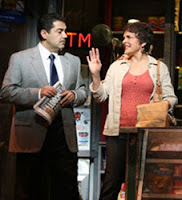 Part of the success here is the audience's willingness to cheer the underdog, the new guy, a presentation of a new culture on stage - upbeat Latin flair layered into a traditional musical structure. Virtually a total cast of authentic and talented Latinos of all types dominate the stage from grandmother to kids. Of special note - Olga Merediz (Abuela Claudia) and Eliseo Roman (Piragua Guy) - two characters who completely surprise and entertain. The elders on the stage, Priscilla Lopez (Camila) and Carlos Gomez (Kevin) bring the struggle of the "old ways" into the picture. Robin De Jesus (Sonny) brings a sketch of today's youth and a dash of comedy to the story. Christopher Jackson (Benny) and Karyn Rodriguez (Vanessa) draw you into the heat of their youthful attraction while Lin-Manuel Miranda (Usnavi) and Karyn Rodriguez (Vanessa) struggle to find their love for each other.


When this show transferred to Broadway this season - a few eyebrows were raised. It was not a sellout off-Broadway. Was the musical score too homogeneously Latin ? Could it make it in a big, mainstream theater? I, myself, didn't think it would last. But after seeing it, I find myself in the unenviable position of eating crow. In The Heights proves itself as a stunningly contemporary and powerful presentation with a fresh young cast who put a new Latin spin on the age old problems of life.
Reviewed by: doug marino 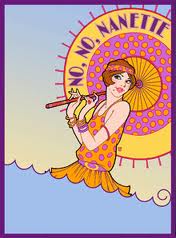 Despite the fact that an Encores! production lasts a mere 5 performances and the cast assembled barely two weeks prior to begin rehearsals - most - including this one - end up being possibly the best performances on Broadway! No, No, exception here. Penned in 1925 by Otto Harback and 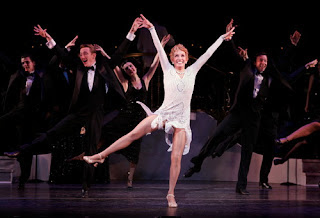 Frank Mandel (who ever heard of them?) with Music by Vincent Youmans (him either?) this tale is a showcase of old fashioned musical song and dance.

Headlined by Sandy Duncan, Beth Leval, Shonn Wiley, Michael Berresse, Charles Kimbrough, Mara Davi, and Rosie O'Donnell- this gem was near production quality! Books? Who used one? One might surmise these actors had the time of their life singing and dancing ...and dancing... and dancing... the night away! 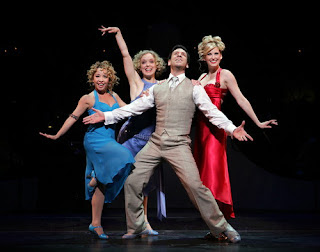 Lord knows how old Sandy Duncan (Sue) is these days, but she kicked higher than I could at 18 years old, she looked better than I did at 23, and she tap danced better than people I know who do it for a living. The incomparable Beth Leval and Michael Berresse paired up as husband and wife. Beth (Lucille) tore down the house with The "Where-Has-My-Hubby-Gone-Blues" Blues and Michael (Billy) tore up the stage with his effortless leaps and dance steps in such numbers as Telephone Girlie and You Can Dance with Any Girl and Call of the Sea. Fred Astaire, eat your heart out - you've got tough competition in the uber-adorable and ever-graceful Shonn Wiley (Tom). Cleverly cast in a role choc full of comic relief, Rosie O'Donnell (Pauline) landed each entrance, one-liner, and exit with aplomb. 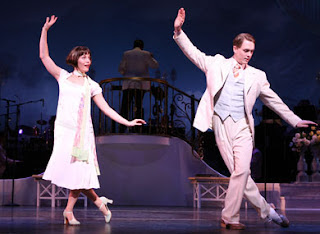 This show is truly a dancer's showcase. Each of the chorus boys (all adorable) and girls made it all seem simple - including the multiple full cast tap numbers. Truly a treat. Remember - two week's rehearsal, folks. Unbelievable how so many people can be on stage tapping and it always sounded line one single pair of feet. They truly wanted us all to be happy. (I want to be Happy is perhaps the most well known number from this show). 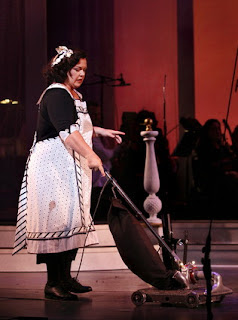 Encores! may represent the "Best Of" when it comes to talent, enthusiasm, and pure enjoyment of the craft. It's not a commercial Broadway run , yet you can see that each cast member truly enjoys every moment of the show. And speaking of "Best of" - an evening at Encores! would not be complete without the incomparable Rob Fisher and the Encores! Orchestra - always a class act located right on stage. And for No, No Nanette - not one, but two grand pianos! Beyond elegant. All those fingers tinkling all those ivories. A perfect match to all those toes and heals a-tappin' on stage. Bravo! Just when you think I'm done with all the complements, I have to mention the costumes - classy, dashy, and always dripping with class. All those flapper girls with the car wash dresses, dripping with sequins - and the dapper chorus boys all in preppy cardigan vests, then swimming suits (the real things) and a classy finish in black tie and tuxes. Never a hair out of place and always a smile on their faces.


I wish i could tell you all to run out and see it, but all that happiness is already faded and the curtain has fallen on the last performance tonight for the City Center Gala. You'll just have to wait until the next one comes along!
Reviewed by: doug marino 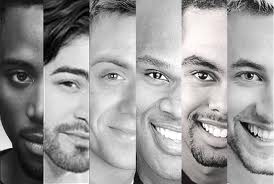 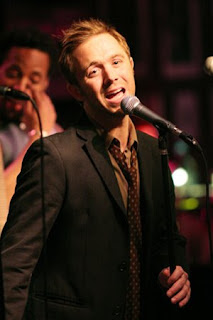 Here's the simple recipe for success: Take a bunch of uber-cute (duh!), extraordinarily enthusiastic, and suburbly talented male vocal powerhouses direct from the Great White Way; Place a half dozen of them on stage at any one time; Let them bring down the house with their often self-arranged, uniquely harmonized standards, Broadway show tunes, gospel inspired ballads, jazz rifts, and explosive rock and roll style. The result: a "Symphony of Sound" that fills your body and soul with pure joy.

These boys know how to put on a show! Jesse Nagar, who still performs today, is the original inspiration and talent behind the group. Rumor has it that the legendary Billy Porter is now also involved in the group. Numbering about 15 in total, you have to imagine that with talent such as this, any number of them are bound to have a "real" gig going on at any time - so they rotate in and out as necessary. 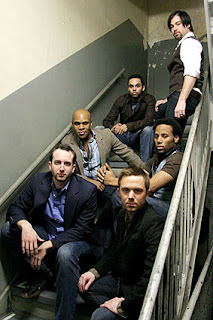 Each show contains a "guest appearance" - usually by a Broadway diva or two. Toss one or two of the boys back on stage in a duet or quartet and you have the spice that makes this hotter.

After 90 minutes of their brand of entertainment at the Zipper Factory - i am left with only two questions: When is the next show? When is the CD coming out?

For more information on these delicious darlings of Broadway - Click Here
Reviewed by: doug marino

Roberto Aguirre-Sacasa penned a gem and 2econd Stage Theater with Scott Ellis at the directorial helm pulled this one off big time. Some have called this the American version of The History Boys. It certainly has the necessary ingredients: Religion, High School, Power, Wealth, Tradition, Family, and, of course, Scandal.


Set in the late 1980's - the decade of the birth of the power brokers and privileged - how far will Brandon go to keep his secret quiet? To what ends will he go to prove he's not gay? His mother and father are both the product of private schools, ivy league educated doctors. Their son, Brandon, a legacy at St Joseph's Prep, popular jock and captain of the football team seems to have it all and knows it. How far will he go in manipulating his parents, his teachers and his friends? Will he admit the truth? The whole truth?

And what about his mother? Has she actually forgotten the past? Has her drive for wealth and prestige affected the way she raises her son? Has it transformed her memory of what those younger years were like? Caused her to selectively forget certain things? Does she believe her son? Could it be him on the video tape? Why would he do this?
Perhaps today, we might question the extent of the angst, the deception. Sure, kids get into all sorts of things. Would we even be shocked by this tape today? Probably not. Sad, but true. But remember the time - the 1980's . In many ways, an entirely different outlook. 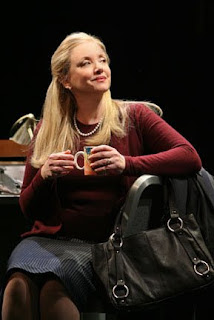 Brian J. Smith (Come Back Little Sheba) takes the helm as the seemingly perfect son, Brandon (he's 2 for 2 with the shirt off thing and I'm not complaining one bit.) and J. Smith-Cameron plays Mom. She needs to stop correcting herself when she stumbles over a line and just relax. The most relaxed moments were her most powerful and most emotional. An entire performance like that would seem a bit less like a reading and more like a Tony Award winning performance. And let's not forget a stand out performance by Christopher Abbott as Justin. I felt his pain, his struggle, and the emotional struggle he had over Brandon. I'm really hope to see more of him on stage.

The play was not perfect (just yet). That's what previews are for. There is a vague feeling of a Lifetime Movie, but it's written better, performed better, and developed much better than one of those. Stroll over to West 43rd and catch a performance of a play that may have a shot at a Broadway run.
Reviewed by: doug marino