Who on earth WOULDN'T want to marry (Ryan Spahn).... um... i mean Daniel Bixby?  In Michael McKeever's play now in previews at the Cherry Lane Theatre, that would be Daniel's partner, Mitchell Howard (Matthew Montelongo). 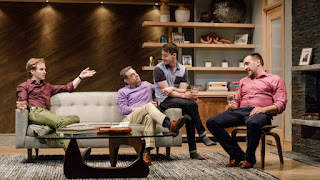 Successful, drippingly boyish, handsome, confident - Daniel wants to marry his partner of 7 years.  They are in love, they live together, and they are just the "perfect" couple.   The trouble is, Mitchell, his partner, doesn't believe in marriage (gay or otherwise).  He's got that old-school view of the gay culture being a counter-culture - we are different, we do not want what they want - these are the themes of his argument against marriage - which he interjects into his un-ending commitment and love for Daniel. 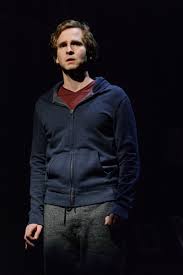 Mr. McKeever starts laying out a rather entertaining story not atypical of many gay men - successful, big incomes, fun evenings, good wine.  Of course he is probably obliged to throw in an overbearing motherly character in Lydia Bixby (Anna Holbrook) who turns out to be more than the butt of several jokes. Daniel and Mitchell are devoted to each other and enjoying the good life together in today's world that is mostly accepting.  They are sticking with each other and there is no doubt about it.  Full stop.

However, when an unexpected event occurs that literally tears at the fibers of their relationship and beings, we learn the true colors of family and friends (kudos uber adorable Lealand Wheeler (Trip) and Barry Dylon (Lou Liberatore) and the tragic consequences of more than one action not taken whether for good reasons at the time or not.

Incredibly humorous turns devastatingly tragic in a mere 90 minutes.  Sometimes we argue about concepts and principles and forget there could be (as slight as the chance could be) some real world consequences to our actions.