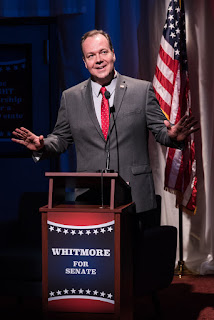 It's not often that a play grabs you and shakes you to the core. Church & State by Jason Odell Williams is one such play.  Presented 8 times a week over at New World Stages, Mr. Williams' new play is a wonderful amalgamation of politics and religion.  It may have a point of view, but it certainly treats all sides fairly.  Quite frankly it may go out of its way to give you a balanced look at the many issues in its hopper.

Rob Nagle aptly plays Senator Charles Whitmore of North Carolina with his southern charm and deeply held beliefs in God and Guns.  Or perhaps they do not run as deep as he thought.  His wife, Sara Whitmore (Nadia Bowers), is certainly the personification of a southern belle who loves Jesus more than her Manolos (well it is a close call).  Leading his senatorial reelection campaign is the uber-neurotic New York campaign manager, Alex Klein (Christa Scott-Reed).  Together these three form a triangle of tension, dialogue, and conflict. 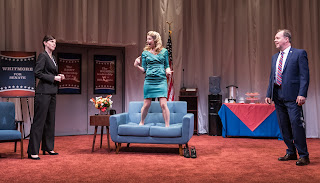 Without giving anything away - be ready for something shocking to occur when u least expect it.  The exceptionally inclusive subject matter allows all sides of the characters, their beliefs, and doubts to be explored.  Make no mistake, the action unfolds in a deliberate manner to garner the highest dramatic effect - and by high i mean stratospheric.

This play is just in its infancy and the goal of the producers (we learned at the talk back after the show) is to present it all over the south and many other "RED" states.   While impact-ful the play is never preachy or extremely biased.  A great piece of theater at a very opportune time.
Reviewed by: doug marino