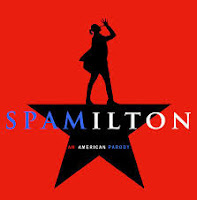 The master or parody strikes again.  Gerard Alessandrini has penned yet another spoof - this time based on one show - Hamilton.   However, his shtick involves making fun of the indomitable Lin-Manuel Miranda and Hamilton using the hit songs and divas from the many other big Broadway hits - Hello Dolly, West Side Story, Camelot, Wicked, Book of Mormon, and the list goes on... and on... and on...

Thanks mostly to casting outstanding singers rather than just comedic actors - Mr. Alesandrini reaches the stratosphere of success with this latest hit. 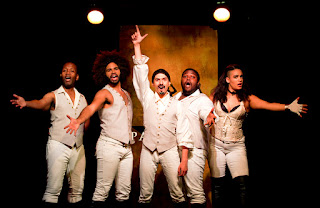 Dan Rosales (Lin-Manuel Miranda) with his long brown locks looks, sounds, and captures the nuances of his real life character.  Nicole Vanessa Ortiz can belt out a tune just like Audra MacDonald and captures many of the nuances of her Hamilton characters as well as the divas that she inhabits.  Chris Anthony Giles and Aaron Michael Ray play two Hamilton side kicks and literally hundreds of others with aplomb.  Newcomer, Erik Hernandez, looking delicious with his shirt on AND even better off, knocks it out of the park.  We even got an appropriately hysterical visit from King George - played with gay-to-the hilt at this performance by Glenn Bassett.

If you're even a tiny fan of musical theatre and enjoyed your Hamilton experience - you will definitely enjoy this slightly more off-beat interpretation!  Go see it, Mr Burr, Sir.
Reviewed by: doug marino