Wink, Wink, Nod.  James Carville and Mary Matalin must be ecstatic.  A whole play written about them - or at least about their story.  In case you live under a rock - they are two of the most diametrically opposed political operatives / commentators who fell in love and got married.  You know, they say politics make strange bedfellows.  Indeed, Richard Abrons and Margarett Perry (the playwrights and the latter also the director) have captured equal amounts of ideological sparing and the attractions it spawns. 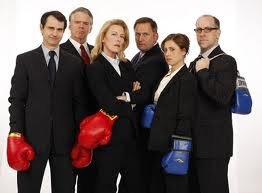 Unfortunately, the story is somewhat stale to an audience bombarded on an weekly, daily, and hourly basis with political trickery, deception, and below-the-belt antics and shenanigans.  Who put that false story out there?  He said, she said.  I knew absolutely nothing about that.  Spin. Spin. Spin.  Make them look bad.  Let them bring themselves down.  Blackberries, laptops, and cell phones.  And lots of Starbucks.

The actors all did a fine job - two presidential candidates - Brian Dykstra (Democrat) and Daren Kelly (Republican) - making bumbling errors and pronouncing things incorrectly never fail to entertain.  Then there are two "older and more experienced" political advisors - Leslie Hendrix (Republican) and Michael Puzzo (Democrat).  Plenty of vitriol, bitterness, and regret going on there.  And then we have the two love-hate birds themselves - Matthew Boston (Republican) and Eve Danzeisen (Democrat).  Not enough chemistry for my taste here.  And it all might have been due to the mis-casting of Mr. Boston.  He appeared to me to be too old and out of step with his much younger opponent, Ms. Danzeisen.

Don't get me wrong - the story is entertaining, light, and mostly enjoyable - if only a scosche too long at 2 hours.  I don't think anyone should expect the  "oh my gosh, i can't believe how it ended" sort of show.  If you go in with the low expectations of such a satirical political romp, you'll do just fine.
Reviewed by: doug marino