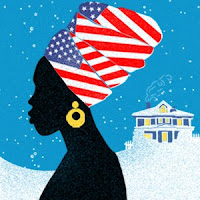 Playwright, Danai Gurira, can have it any way she likes, but she will get some friendly advice here.  She's penned a terrific story, Familiar, about the emotional struggles of an African family who moved to America.  How far does assimilation go?  Does it include religion? What about traditions?  And by the tenor of the dialogue one suspects that much of the assimilation may just be superficial to some - a pathway to a better life but the strong ties to tribalism and roots may never go away - especially for those left behind who may simply scoff at the Western way of life. 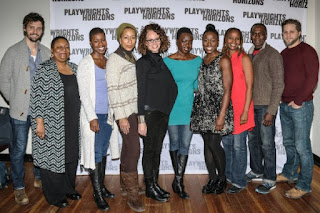 The story revolves around a typical family (read dysfunctional):  A baby sister (Ito Aghayere) who is idealistic, nomadic, lost, and stumbling through an artistic life (read as - in America you need to work, sister); an older stronger sister (Roslyn Ruff) who has placed Jesus and her skinny liberal white fiancee (Joby Earle) at the center of her world; a pro-western mom (Tamara Tunie); and her quiet, hen-pecked husband (Harold Surratt).  Enter stage right, an older sister (Myra Lucretia Taylor) here from Zimbabwe for the wedding to preside over an African marriage tradition and you have a powder-keg on your hands.

Ms Tunie plays her role with impeccable skill, demeanor, and poise.  Ms. Taylor is a powerful foil to the entire family.  Mr. Joby and his brother (Joe Tippett) play a polar opposite brother-bother team that lays bare stereotypical American archetypes. Quite frankly, Mr. Tippett and Ms. Tunie take the top slots in this play among an already great cast of actors. 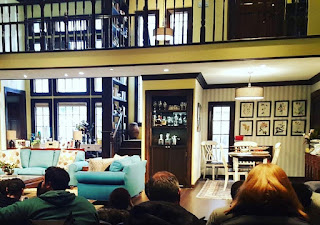 Ms Gurira needs to tighten this leaky ship, however.  Too long.  Far too many un-explored paths dropped on us and never quite explained.  Sons of the youngest sister (Melanie Nicholls-King)?  A dress brought in and tossed aside?  Struggles of Chris's brother never fully explored (although his pitch-perfect portrayal of the classic fuck-up son was brilliant!)?  Why did mom has such a visceral reaction to her sister arriving from Africa without fully knowing the reason?  There is certainly a twist in this plot - but it comes far too late in the action.  Remove a lot of useless chatter and exposition and bring the twist up forward.  Shorten Act I and get this ship at just under 2 hours.  Exquisite sets by Clint Ramos and superb lighting by Tyler Micoleau.