The Battle of Central Park

Playwright Andrew Massey stumbled onto Robert Moses in a car ride in the Bronx.  He stumbled on Joseph Papp in his college drama class.  I bet he never thought he would write a play about these two powerful men, each in their own worlds - which collided in a grand battle for the Arts smack in the middle of Central Park. This bio-play is really a story told and re-told through letters, newspaper articles, and memories.  The very clever point which could have been made even more dramatic in the play is that these two gentleman, despite their massive battles never actually met.  Mr. Massey opens the play with a scene that once repeated at the finale, hits that point home.  Through the use of projections, slides, and historical photos, the ensemble, who are part narrators and part choreographed movement, weave a tale of two powerful men - often at odds with each other.  Kudos Jamie Watkins and Michael Monacan (Projections) and Annalisa Ledson (Choreographer). 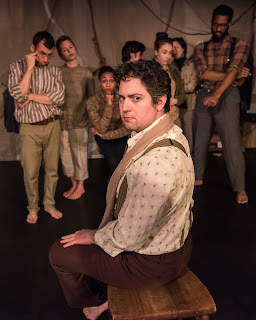 Jon Huggins (Robert Moses) has an impressive stage presence and is a commanding actor.  (He's also incredibly tall).  His booming voice and larger than life attitude brought the needed arrogance and power to life in Mr. Moses.

Nick Trotta (Joseph Papp) made you feel the conviction of his beliefs, the frustration with the government inquiries to his private life, as well as his life long commitment to and love of the arts.  Both actors held court in this 60+ minute historically relevant and culturally interesting piece.

Both deserved their own bow after the initial company at the curtain call.  That's just how good they were.

I could really see this play being expanded slightly (maybe 90 minutes) and brought onto an off-Broadway stage for a slightly more robust performance with more projections/slides and a moderately expanded story filling in some of the gaps.  Not having given much thought until this moment, I could even imagine two stars teaming up to bring the show to a Broadway stage.  Danny DeVito as Papp?  Tony Goldwyn or Jeff Daniels or Kevin Spacey as Moses?   Stranger things have happened.
Reviewed by: doug marino