The Purple Lights of Joppa Illinois

The first 20 minutes of Adam Rapp's play are the creepiest.  Although the creepy factor never dissipates, given the subject matter it never quite goes away.  A bi-polar man with psychosis and two teenage girls is a volatile mix no matter what twist the plot may take.

Some will applaud Mr. Rapp for tackling the topic of mental illness in this manner.  Some, like me, will simply not enjoy the idea of being entertained by it.  It felt to me more like a require summer reading project that was meant to be discussed and dissected afterward.  Forced.  Purposeful.  It was fine theatre in the sense that the actors told a story but it was the story that I simply did not want to hear no matter the quality of the actors. 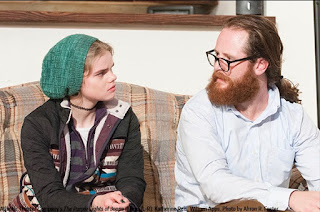 William Apps (Ellis) gave a profound and moving performance as the bi-polar man living in a very simple and obviously poor setting.  Katherine Reis (Catherine) turned in a solid, at times emotional, at times stoic performance.  Susan Hayward (Monique) was at times perhaps too bold, came on too strong, and tended toward the dramatic.  Ms. Haward's performance was likely a directorial mistake rather than Ms. Hayward's but since Mr. Rapp both wrote and directed this play one can more easily place blame.  Connor Barrett (Barrett) seemed mis-cast and poorly developed at the same time.  His hovering in the kitchen seemed odd and his dialogue seemed oddly spotty ill developed for a nurse and patient supervisor.  I'm not sure Mr. Rapp captured the essence of this type of medical/psychiatric person in Barrett. 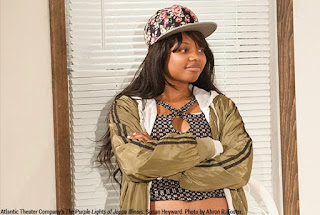 I left the Atlantic Stage II pondering the title of the play.  It is explained in the dialogue just fine, but I'm not sure it really captures the essence of the performance.  It's a 'where' but not a 'what'.   After you get past the first 20 minutes of really creepy, it's just mostly uncomfortable and sad.  With only a few moving performances, Purple Lights left me feeling empty, worn-out, and ready for a drink.  Perhaps Mr. Rapp should focus on wither writing OR directing.  Doing both removes a creative mind from the theatrical process and the work suffers.
Reviewed by: doug marino