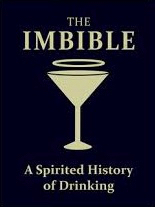 Now running in its second year, this little-known show, Imbible, A Spirited History of Drinking, set in the speakeasy downstairs at the Soho Playhouse on Vandam Street is an appealing and entertaining history lesson in the theatre.

Performed in a bar, (an actual speakeasy) by a bartender - you certainly won't feel cheated out of the truth and some deep history on the subject.  Infused with barbershop quartet melodies and zippy little ditties about the subject matter - this show can't fail to entertain.  The fourth wall is broken and the performer is really an M.C. to the delight of the audience. He demonstrates a real live distillation machine and has many PowerPoint slides to illustrate his walk through history.  And talk about delight - my favorite backwaiter - Mark Edwards - was a truly an adorable, talented hambone who never failed to entertain in every scene.

This quartet of talented actors actually do realize their show is a low budget delight - and even point that out at several spots during the show ("Ladies and Gentlemen, I remind you there are no special effects here tonite").

If you're interested in booze and like to be served drinks (there are 3!) during a show - head down to SoHo and take in an evening with the delightful cast of Imbible.  Be warned, you have to be 21 or over to partake.  And fear not - the bar is open before and after the show!
Reviewed by: doug marino