The Man In The Ceiling 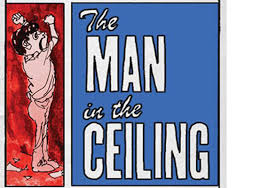 A new musical isn't easy to nurture and bring to the stage.  Andrew Lippa has penned music and Lyrics to the book by Jules Feiffer to produce a kid-focused yet very adult musical.  Now playing out in Sag Harbor at the Bay Street Theatre, The Man in the Ceiling is truly an opportunity for a young actor to sink his teeth into.  Let's not forget that the music is big, bold, and Broadway-ish. 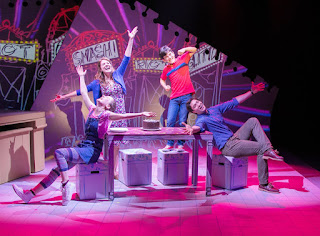 Jonah Browcow (Jimmy) is an amazingly talented kid who can belt out tune after tune all the while breezing effortlessly across the stage.  It appears to me to be the role of a lifetime for any young kid.  Following the format and story in the book,  this musical follows a kid who just wants to draw and illustrate and his father (Danny Binstock) who just wants him to play softball and be a "normal" kid.  Throw in a caring peace-maker mother (Nicole Parker) and a devoted sister (Erin Kommor) and you have the recipe for a Saturday afternoon movie special - but the music, heart, and story that fills the stage is so much more.  Honestly the only character that didn't quite make much sense or have a fully sussed out role was Charley (Brett Gray) - he could have gone in so many directions but instead went in none.  Leave it to Mr. Lippa to slip into the role of Uncle Lester - the uncle who writes musical theatre!  I assume this was for artistic purposes and not some desire to return to the stage. He's goofy and cute so it all worked - at least in this role.

All in all, as I seem to say repeatedly there are a few "stop hitting me over the head with this" moments that could be trimmed to shore up this show and make it tight.  It has a great video projected set background as well as the giant puppet (the Man in the ceiling) we only get glimpses at.  Plenty of heart, and a heap of soul, this show will go somewhere next and be better for all the out of town tests.
Reviewed by: doug marino